It seems a new bombshell is dropping every day and all seem to question Stephen Harper’s credibility, honesty, transparency, respect for Parliament and for the Canadian people.

Mr. Sincerity, Stephen Harper, thanks Seniors for their contributions... read from a teleprompter of course! 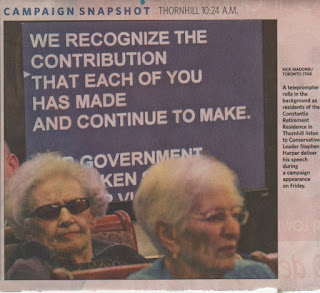 Our Federal Parliament approved $131M under the “Border Infrastructure Fund” to ease traffic congestion at our border crossings and you’d expect every penny approved to go to that purpose, wouldn’t you? Yet more than $50M of that cash was siphoned off for projects completely unrelated to expenditures Parliament had approved.

Every Canadian has cause to be damn angry at the lack of honesty, transparency, and accountability of the ruling Conservative Government which shows distain and disrespect for Parliament and for the Canadian people at almost every turn.

Harper’s bait and switch tactics are deceitful and dishonest at best and criminal at worst.

The G8 Legacy Projects funded with moneys approved for the border infrastructure improvements include public toilets, Muskoka roads, sidewalks, and parks improvements, improvements to downtowns in Huntsville, Bracebridge, and Gravenhurst, new highway signage, tourist information centers, and airport improvements, all of these projects quite distant, in some cases 100 Km, away from the G8 summit site.

I do suppose it is possible that if President Obama, or one of the other G8 leaders cloistered at the Deerhurst Inn Resort, found time to drive about for a little tourist site seeing on the two day Muskoka Conference, they may have found nature calling and shouted out to their driver....”Stop the Limo...I’ve got to have a pee at those public privies over there!” After all, when nature calls, job 1 (or job 2 for that matter) is not far behind! So spending the $275,000 for these privies 20 km away from the conference center might be a useful contingency (LOL!).

On the other hand, one could assume that the $50M spent in Tony Clement’s Muskoka riding was blatant vote buying. Even some conservative supporters are turned off by these tactics...and you should be too!

Vote buying is a common strategy for Harper's Conservatives! Two members of the Julian Fantino’s Vaughan Conservative Riding Association, one a former Federal Conservative Candidate, resigned their riding membership last week to protest $10M of your tax money being given to the Vaughan Health Centre in a fundraising drive being spearheaded by Fantino’s former fundraisers. This looks like a giant Harper payback for helping get Fantino elected!

It seems the bloopers, blunders, boners, bungles and botch ups orchestrated by the Harper Conservative boneheads never end. There’s another one every day! And you ain’t seen nothing yet!

The roots of the Harper Conservatives arose out of the Western Canada Reform and Alliance Parties which were seen as extremist and intolerant due to a number of statements by Reform MPs which were considered to be racist, homophobic, or sexist. The Reform Party called for the privatization of various government services that the party believed could be better provided by the private sector. These government services included a number of state-owned corporations including Canada Post, the Canadian Broadcasting Corporation, and Petro Canada (sold in the last couple of years under the Harper administration to Suncor Energy), and Harper and Jim Flaherty have recently floated trial balloons suggesting privatizing the Canada Pension Plan.

If the Conservatives get a majority government, we are sure to see the re-emergence of the right wing legislation reflecting the Reform ideas Harper described in his firewall letter to Premier Ralph Klein such as replacing the Canada Universal Health Plan with a two-tier private and public health insurance system, anti abortion legislation, and reduced social program expenditures, all publicly supported by Stephen Harper in his writings. Harper once stated that he favoured scrapping universal health care and replacing it with "for profit" U.S. style health care. Harper's principal objective is to Americanize all aspects of Canadian Society creating a society favouring the rich and privileged...and armed---with Harper's intent to scrap the gun registry.

One of the keys to Harper's present election platform is a reduction in Corporate taxes from 18% to 16.5%...and these corporate tax rates are already among the lowest in the world. The lost government revenue necessary to balance the huge defit budgets, of course, will have to be picked up by you, Mr. and Mrs. Middle Income Earner, either through tax increases or the slashing of social programs.

We have seen inklings of Harper’s Right Wing and Extreme "My Way or the Highway" Agenda in his trampling of Civil Rights during the G20 Gadhafi style police smackdowns, his government’s withdrawal of government CIDA grants for Kairos, a church-based aid group because it supported abortions in its third world work (the famous Bev Oda “NOT” controversy), and Harper’s key current election platform of funding Jets, Jails, and Corporate Tax Cuts all funded through spending cuts to support the poor and middle class through spending on higher education and social programming to provide opportunity to ordinary Canadians.

In showing distain for Parliament and its traditions, Harper refused to provide documentation to MP's about the costs for the jets and jails he proposed and thus was ruled by the Speaker of the House to be in Contempt of Parliament, the first time a Westminster Democracy of any of the 178 in the world following the British Parliamentary model has been found to be in contempt of its Parliament---a serious matter that Harper puts down to simple political gamesmanship.

Harper calls potential coalition governments "dangerous and reckless"...no way! They are the common governments in many countries and are likely to be so in Canada into the future as long as the Bloc wins support in Quebec at the expense of the old line parties.

Harper’s misrepresents the truth on so many fronts in his efforts to retain control. 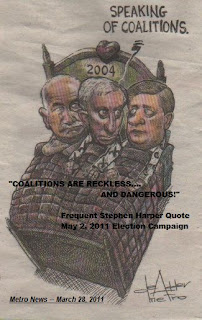 And yet Harper continues to dispute the recent “Contempt of Parliament” ruling of the speaker.

He’s a guy that makes up the rules as he goes along. He obviously believes that the ends always justify his means.

With Harper’s history of coalition building, it is extremely dishonest for him to now call them reckless and dangerous!

Dangerous is what Harper would be if he ever got a majority government and started implementing some of the programs he developed as a policy wonk for the Reform Party.

Fortunately, I don’t believe that Harper will get that majority he craves because his campaign launches a different controversy every day. He has been courting the ethnic communities with government handouts, and as I write this, Etobicoke Centre Conservative candidate Ted Opitz’s campaign team has asked multicultural groups in the riding to wear “ethnic costumes” for a photo op backdrop at Harper’s televised rally in the riding. This has resulted in controversy within the ethnic communities as costumed ethnics appeared with signs “Is this ethnic enough?”, “I’m Canadian,” “Harper’s Photo Op Prop,” “I’m very ethnic,” “CTV news...Is this ethnic enough for you,” etc, ridiculing the request from the Conservative Campaign Team.

My gosh, we just barely got over the story about Stephen Harper’s Campaign Team ejecting a young girl from a rally as the planning team found a picture of her and Ignatieff on her facebook page.

Interesting how Harper is so keen on screening stuff like this when a recent story describes a 70 year old top Harper advisor, disbarred lawyer Bruce Carson,who had spent jail time for fraud (5 cases) and was recently “outed” for influence peddling in negotiating federally funded water purification contracts with aboriginal communities in which his 22 year old girlfriend would get 20% commissions. Incidentally this same advisor had been invited to dinner at the Prime Minister’s 24 Suffolk Drive residence accompanied by his former live-in girlfriend, a woman deported from America for running a prostitution ring and for money laundering.

There’s a new scandal every day and we’re only seeing a small sample of what we’ll get with a Harper majority.

Lord! Please save Canada from a Stephen Harper majority!