Hey Stupid! It's Not the Government of Canada!

So I bet you didn’t know that we have a new political party and a new government in our country.

For heaven’s sake, we may have even have had our nation renamed.

The PMO has sent a directive to all departments that the words “Government of Canada” should be replaced by the words “Harper Government” in all Federal Government Communications. 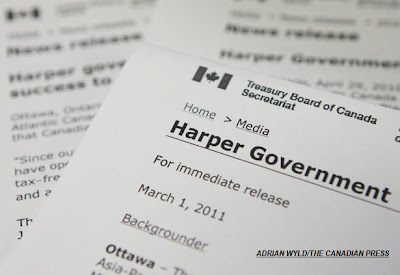 So over Harper’s political history, he has morphed from Liberal to Reform to Alliance to Conservative (not Progressive Conservative which implies some forward momentum) and now to the Harper Party where he stands alone without a hope in hell of getting a parliamentary majority.

The Prime Minister has firmly put himself in the center of all Government operations reducing the role of Parliament, his Cabinet, the 308 Members of Parliament, and even the 143 members of his own party elected to Parliament. Only one person, Stephen Harper, counts in the Harper Government.

His control is such that cabinet ministers like Bev Oda, and the famous “not” inserted by the PMO into a government funding agreement document, are forced to take the “fall” for the Boss's directives---be damned the reputations of anyone in his cabinet or in his caucus.

Many of us have had those authoritarian bosses from hell that would have their staff take the blame for the boss’s orders when the thing goes bad and the heat rises.

Bosses with guts, of course, would have no part of this. They would have the strength of character to stand up and face the firing line. But not Harper. His strong arm style has everyone running scared.

Do as you’re told or face the consequences! Shortly after Harper’s Conservatives won a minority government, a bureaucrat who refused Harper’s order to refer to the newly elected government as "Canada’s New Government" in government communications was relieved of his duties.

As a guy more important than Parliament and its Parliamentary traditions and values, Harper makes his own rules as he goes along.

In December, 2008, Harper prorogued parliament when he faced defeat and prorogued it again in January 2010 when he didn’t want questions on the Afghan detainee issue interfering with his enjoyment of the Olympics. He broke his own fixed date election law to call a politically expedient election, and cheated on the 2006 Conservative Party election spending reports. Harper's Conservative Officials are currently under criminal investigation for exceeding party spending limits by transferring funds to 67 local candidates who would then use the funds to pay for national advertising. They'd then get a 60% reimbursement from Elections Canada that they'd then donate back to the National Party. In effect, taxpayers were paying a portion of the Conservative National Advertising Campaign and four officials of the Conservative party are now facing potential prison terms for this sleight of hand.

Harper has placed himself above Parliament as the centre of the Canadian universe and maybe the only Canadian that matters.

Of course his scale of importance in his own mind was demonstrated by his prorogation of Parliament rather than facing a non-confidence vote he was bound to lose where he’d be forced to follow the long established British parliamentary tradition of resigning as Prime Minister.

I can understand that dictatorial governments like those deposed or close to it, Libya and Egypt, might be called the Muammar Gaddafi Government or the Hosni Mubarak Government since every action of those regimes was designed to maximize their leader's wealth on the backs of the people....but in Canada? Never!

Never mind using terminology like the “Harper Government” heading every piece of Government of Canada correspondence. Parliamentary tradition will not even allow the name of a member to be spoken aloud in the House and those so doing will be ruled “out of order” by the speaker.

One thing for sure, though, Government of Canada correspondence screaming "Harper Government" will be flying out to every world leader to impress them of Stephen Harper’s importance to our nation. It's his 15 minutes of fame and he'd better take advantage of it.

If Harper, with his distinct lack of legislative accomplishment as a leader, can rebrand the government of Canada as the Harper Government, I can’t understand why there was no Winston Churchill Government or FDR Government, or Ghandi Government. After all, these political leaders are recognized worldwide as men of stature leading their countries and the world to great things.

And in Canada, we’ve had some great leaders in William Lyon Mackenzie King , Sir John A. Macdonald , Sir Wilfrid Laurier, Louis Saint-Laurent, Pierre Elliott Trudeau, and Lester Pearson, all judged as Canada’s greatest Prime Ministers by experts, and yet not one put themselves on the same kind of pedestal that Stephen Harper is climbing upon.

A PM, like Liberal Mike Pearson, who, like Harper, headed only minority governments, brought us the Canadian Flag, Old Age Pensions, and National Medicare, three major accomplishments that define Canada. All this, of course, was in addition to winning the Nobel Peace Prize for creating the UN’s first designated peacekeeping mission to resolve the 1956 Suez Crisis.

With these huge achievements, Pearson, had he been a less modest man, may have been justified in putting his name tag on the Canadian Government.

But no! Only Harper would do that! Combined with his iron-fisted control, it's a sure sign of insecurity!

With no achievements to speak of, and devoid of any legislative legacy, and with tons of broken promises, Harper's only legacy will be one of dictatorial rule and a flagrant disregard for the traditions and laws of Parliament.

In a recently published book, Harperland, columnist Lawrence Martin writes, that Harper has raised the concentration of power within the Prime Minister’s Office to new heights. To maximize his control over the government, the minority Parliament and the civil service, the prime minister has recurrently ventured where none of his predecessors have dared to tread.

And putting his name-brand on Canada’s Government is ample proof of his dictatorial style and his lack of concern for the plight of many Canadians.

Canadians should be wary of those that run up their own flag and blow their own horn---usually because no one else will do it! And usually for good reason!

If you are opposed to Stephen Harper rebranding the Government of Canada in his own name, you may want to sign the petition of Canadians

I did on the first or second day of the petition and was the 15155th person to do so.

My remarks there are that Stephen Harper has not done a damn thing of consequence for this country except to make "prorogue parliament" part of every Canadian's understanding of government irresponsibility.

Why not add your voice and your message to the petition?

Conversely, of course, you may disagree with the petition and want to start your own on the same site. Maybe something like, "Stephen Harper is the best thing since sliced bread for Canada and I fully support his efforts to rebrand Canada as Harperland"

You'll get at least two signatories to this petition. Yours...and Stephen Harper himself!