Oshawa has the highest assessment rates in the GTA and about the highest in Canada and citizens have had enough. 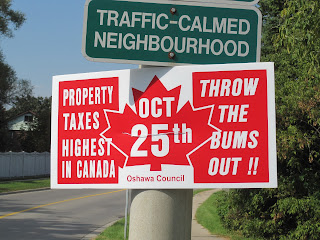 Citizens are realizing that their taxes are increasing twice as fast as costs. Politicians have increased your taxes by 13% over this last 4 year term of council despite the fact that costs have only increased by 6.56% as measured by the inflation index over the same period.

Citizens also realize that the present incumbents have run up the city debt from $10 million when they took 0ver under John Gray’s leadership to $100 million in a few short years saddling present and future tax payers with excessive debt servicing costs. This debt is due, of course, mostly to the $4 million annual operating losses and debt servicing costs of the GM Centre and the unneeded demolition and rebuilding of a large portion of city hall. To compound the problems, council is continuing to increase debt with the demolition of the Civic and its reconstruction as an indoor soccer pitch.

The demolition and rebuilding of city facilities is not the only culprit saddling the public with unneeded and unwarranted expenses.

Some politicians, like Louise Parkes, are even having you pay their parking tickets, their flower arrangements ($250), their purchase of city parking tokens ($250) despite the fact she has free parking at city hall, and her blackberry costs which are only $23 less than the total of eight of her fellow councillors and almost $1700 more than the second highest spending city politician. And now she’s calling for spending restraint and a 5% rollback of city politician salaries. You’ve got to be kidding! With her history of reckless spending, can you really believe she’ll be any different than John Gray’s wild spending? I don’t!

I don’t trust incumbent politicians who have voted for every tax hike possible, including taxing family’s ability to pay for their children’s sports participation with council’s increasing user fees for our ice pads, swimming pools and other recreational facilities, and who have tried to break the bank with their own personal extravagance. Their calls, now at election time, for restraint, tax cuts, and salary rollbacks is highly dishonest when compared to their past taxing and spending record.

In fact, I find Parkes’ calls for restraint wildly offensive, misleading and deceptive being so inconsistent with her obscene spending and flagrant disregard for our tax money. Spending restraint is a value that you practise over the years....it’s not a value you simply adopt at election time! In fact, this dishonest practice makes me question the truth of everything she says. No wonder politicians have such a bad reputation for truth!

Parkes’ call for spending restraint and salary rollbacks is highly inconsistent with her own “take” of a giant 54% windfall gain in her personal salary and expense spending over the first 3 years of this current term with results not yet reported for 2010. How many Oshawa citizens have enjoyed her 18% annual compensation gains in this "tough time" economy? Citizens have had enough of this feeding at the public tax-trough at our expense!

Citizens are starting to realize all about this “kid in the candy store” spending. They’re beginning to understand why a $350,000 Oshawa house is taxed at about $1200 more than if it was moved across the town line into Clarington, Scugog, or Whitby. Tax savings from moving your house to our neighbouring municipalities would fund you an annual winter cruise in the Caribbean!

High Oshawa taxes discourage home purchases here depressing house values and robbing every home owner of tens of thousands of dollars in home equity. Its high taxes that give Oshawa the cheapest housing in the GTA.

That's why as a Mayoral Candidate, I am promising 3% annual tax cuts until our tax rates reach the average of the GTA. Oshawa City Politicians have to cut the fat, the waste, the inefficiencies, and the reckless "drunken sailor," spending. City Politicians have to take far more care of your tax dollars. We can only have what we can afford. As your new Mayor, my guaranteed tax cuts will put "real" money---"Bill Bucks" in your pocket every year.

Look at your city tax bill. You can check your tax bill to see what your savings will be that you can take to the bank when I am elected Oshawa's next mayor.

These tax cuts will mean that approximately $3M will be cut from Oshawa’s annual revenues of about $115M which will be slow enough for adjustments to take place without service cuts. The tax cuts along with more careful spending should get our taxes at the GTA average in approximately 6 years as we continue with tax cuts while other GTA municipalities continue to increase theirs.

Politicians will argue that 3% tax cuts are not possible, but in fact we’ve had 4% tax increases in each of the first three years of this terms and only a 1% increase this year which the city manager said would be easy in this election year. This is tax “game playing” in the extreme and really results in a 3% cut from the 4% increases of the past three years. If this 3% cut from the expected was “easy” this year, it will be “easy” also next year to come in with my 3% cut.

We’ve had enough “game playing” with your “hard-earned” cash....and it's a game I'm unwilling to play.


Be sure to follow Bill’s radio broadcasts, “Eye on City Hall”,
every Monday, 6-9 pm EST, on http://www.ocentral.com/thewave/
Posted by Site Administrator at 5:33 PM