Mayor John Gray and His Merry Band of Beaver Killers

At the June 28, 2010 city council meeting, city council were presented with a staff report that addressed the problem of a colony of beavers building dams in the Goodman Creek storm management retention pond. It reported that city staff had engaged trappers to ensnare the colonizing beavers with underwater traps. This would cause the beaver to die a slow and terrifying death by drowning.

If you mistreated your dog in the same fashion, you would be called up on the carpet and subjected to a lengthy prison term, and an examination of the state of your mental health.

This deplorable staff information was accepted unanimously without comment by any member of council who are used to voting to destroy or demolish everything that comes to mind---city hall, North Oshawa arena, the civic, rundle house, the downtown, etc., etc., etc….and now, the Goodman Creek beaver colony!

This is just another episode in a never-ending litany of incidents, bad judgements, and political pratfalls by our current crop of Laurel and Hardy Keystone Kops "Comedy of Errors" City Council that can’t seem to get anything right. It would all be so funny, if it weren’t so damn serious. 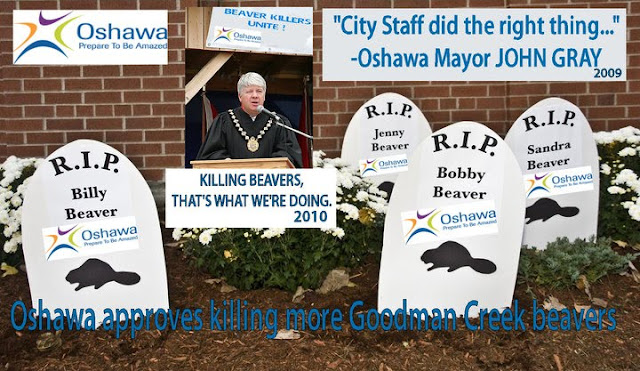 This city council is so politically inept that it trashes this city under the “bad publicity” bus with virtually every action it takes.

This city council is so inept that city staff must be toying with the politicians by slipping in this beaver killing information at the last council meeting prior to the October 25th election. Perhaps city staff, like many city residents, wants to see a complete Election Day wipeout of all of the present incompetents.

Voters will have an important choice to make on the Oct 25, 2010, voting day---whether to re-elect the incumbents to give us more of the same incompetence and lack of responsible oversight or to replace the old and tired faces with new who would be more alert to responsibly managing the affairs of this city.

In watching Oshawa elections for the last 30 years, I’ve never seen such potential political talent stepping up to the election plate as I’ve seen this year.

Every councillor has a duty to yell and scream when they see irresponsible or unethical actions or bad judgements being made by council or city staff, or any individual member of council. Instead we see a council that is not self-policing in any way…a council whose members jump on politically expedient bandwagons only after bad/unpopular decisions have been exposed by the public.

Every member of council was silent on this “beaver issue” like they were so deafeningly silent on actions such as funding the $46,000 MBA’s or the $45,000 Mayor’s birthday party Stephen Colbert day, or the $1/4 Million Cullen Miniatures purchase, until the wastefulness was exposed by private citizens. And only then did some see political opportunity in jumping on the bandwagon already exposed by private citizens.

Voter’s have to be cognizant of those politicians who speak out of both sides of their mouth at once…voting one way at council and then supporting the opposite positions to voters.

This is not the first time this city council has voted in support of inhumane killing of beaver in this pond. They reluctantly admitted to killing six beaver here in November, 2009, after first lying to residents that the beaver had been captured and relocated.

The November killing raised considerable public furor at the time and you’d think that the fuss raised would have taught council and city staff that the public would not condone this brutal action. Guess they are either slow learners or just don’t give a damn about voter’s concerns.

Of course, we all know that staff can take control if there is weak leadership at the helm...and Mayor John Gray is often seen as an enthusiastic cheer leader for city staff. In his hard hearted fashion, fully supportive of the staff decision to slaughter the beaver and refusing to call a meeting to review the matter until forced to do so by a petition of the majority of council, Gray intoned, "We just have to get rid of those critters some way."

I received an email from Andrea Bragg, an Oshawa resident concerned that beavers in Goodman Pond were once again being inhumanely killed in the same barbaric fashion as last fall, and that despite the public concern raised at that time, city staff have not come up with recommendations that would include relocating the animals or installing a beaver pipe that would control water level buildups at the same time as allowing the beaver to continue to exist in the pond.

Ms. Bragg suggests that city hall’s action to drown the beavers, which graces Oshawa’s Coat of Arms in recognition of it being a First Nation’s Trading Post for beaver pelts in earliest times, is brutal, unethical, and unacceptable in present times.

Besides, beavers presence in the retention pond and their subsequent raising of water levels has resulted in the emergence of a more diverse ecosystem including ducks, swans, herons, fish, mink, muskrat, turtles, frogs, snakes and foxes, and a more interesting mix of plant life---a little bit of Canada’s cottage ecosystem right in the middle of Oshawa. Hell, the beaver are providing free engineering and labour to do a job of parks beautification and naturalization that city hall and its taxpayers would otherwise be spending big bucks to do. Perhaps city hall sees these busy beavers as a contentious labour issue!

The vast majority of city voters would agree with Ms. Bragg and it is totally unbelievable, that in this election year, no city council member would object to the inhumane culling of this beaver colony.

Ms. Bragg said her group was ready to call in the Toronto media, even though, as she says, “This city does not need any more negative publicity.” In my response to Ms. Bragg, I suggested that she should call in the Toronto media as the most expeditious way of trying to save the beaver, since any reasoned plea to city council usually falls on deaf ears, especially as council has recessed for the summer and will not now be meeting until after the October 25th election.

Even adverse publicity has not stopped this city council from irresponsible action in the past, but it is the best hope Ms. Bragg’s group has of stopping the senseless slaughter of the Goodman Creek beaver colony.

Ms. Bragg and Marissa Kata organized a protest rally attended by about 55 residents and a couple of city councillors at the Goodman Creek Retention Pond on Saturday, July 17. They also invited the Toronto Press.

In preparation for the July 17th event, concerned resident Jack Snedden was checking out the surroundings around the Goodman Creek beaver pond. Despite city hall’s assertions that the traps involved were underwater snares, he found two “loaded” beaver traps partly buried in the mud and vegetative material surrounding the pond. Had children stepped on these, they would have been seriously injured with expensive potential lawsuits lodged against the city.

Councillor Brian Nicholson, who was at the rally, insisted that these snares were not the ones engaged presently by the city and that these must have been left over from last November in the last beaver cull.

This lack of care is even more serious if the traps had been left there over the winter and had not been collected and accounted for by the “experts” who were paid to set the traps on behalf of the city.

As a result of the protest rally, enough councillor signatures were gathered to hold a special city council meeting on July 21 to review the earlier beaver killing decision. A motion by Brian Nicholson to immediately stop all beaver killings in the Goodman Retention Pond and for city staff to come up with a comprehensive plan to control water levels and flooding potential in city beaver ponds was passed on votes of Brian Nicholson, John Neal, Robert Lutcyk, Tito Dante Marimpietri, and April Cullen.

Opposed to the motion, and continuing to support the brutal slaughter of the animals, were Mayor John Gray and Councillors Nester Pidwerbecki, Joe Kolodzie, and Mary Anne Sholdra.